Select your local radio station from the list below

We hand make Nixie clocks in the heart of England. A Nixie Clock is so called as it uses Nixie tubes to display the numbers that show the time. Invented in 1955, the Nixie tube was used in the first electronic calculators, and early computers to show numerical information. As soon as the LED was invented, the Nixie tube became obsolete with the last ones made in the UK in the late 1980’s.
They do though have a wonderful retro glow, and we take original tubes and either upcycle old pieces of equipment, or make new housings and combine together to make the most amazing clocks!

Bad Dog Designs started in 2014 in a spare bedroom, and is now the UK’s largest manufacturer of award winning Nixie Clocks, and can even be seen every now and again on BBC1’s Money for Nothing turning unwanted items into Nixie clocks. 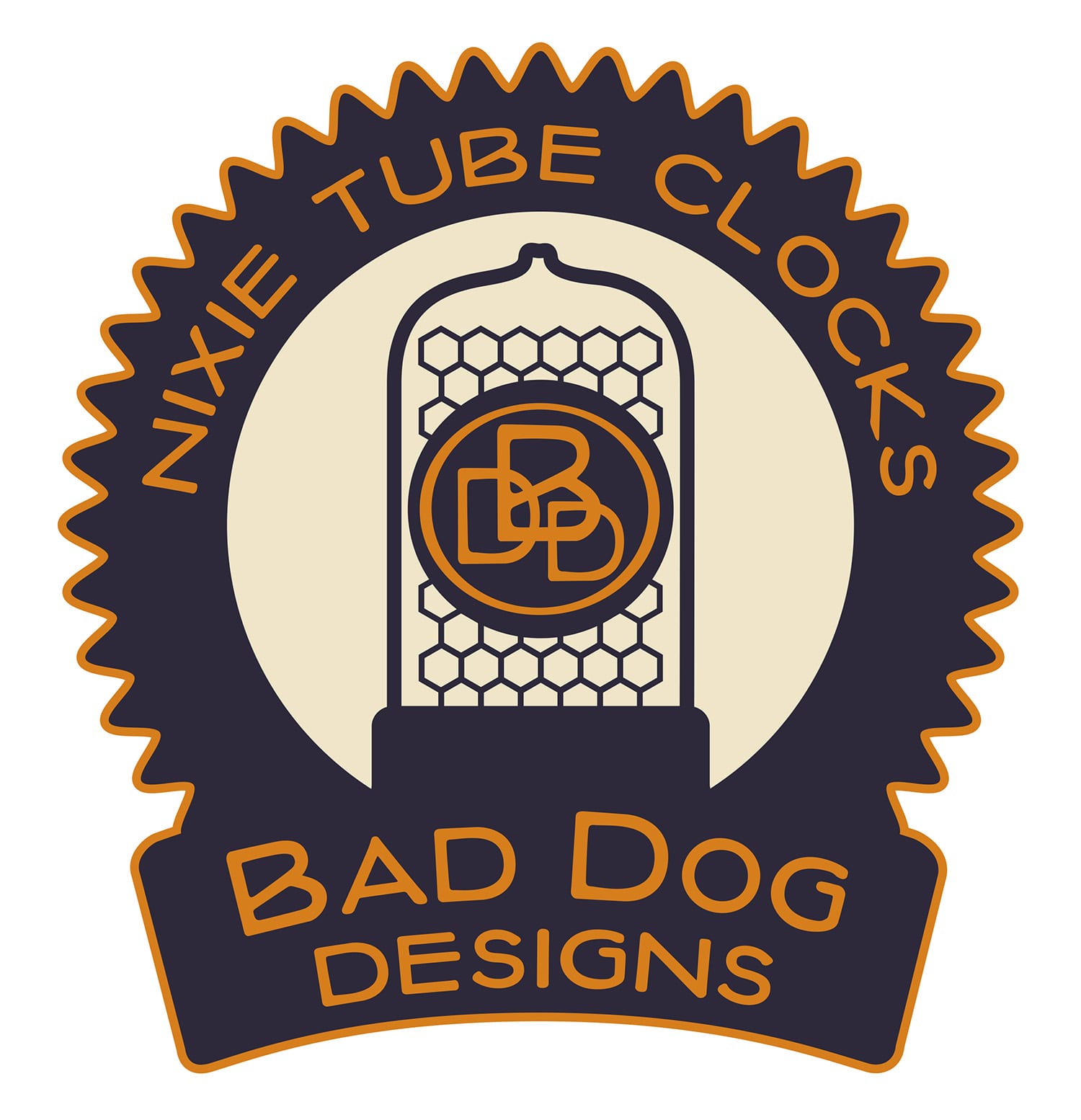 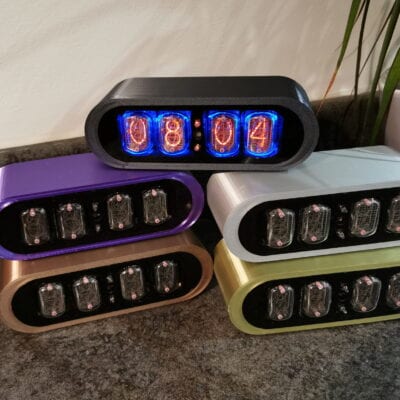 Presenting the POD clocks, a stylish little clock that uses the latest technology in terms of manufacturing and electronics. The casing is 3D printed, allowing for a range of bright metallic colours from a vivid purple to a convincing rose gold, or we can make any colour in between! The clock has been designed to be as easy to set as possible, one button for setting the hours and another for the minutes. Once set you can then leave it and it will accurately and reliably keep time for you. If you're more technically inclined, there is then a settings menu and you can change and alter so many parameters, we had to include a 16 page booklet with the clock! 4 off legendary IN-12 Nixie tubes - life in excess of 20 years Time and date display Light sensitive, will automatically dim in a dark room Back light colour fully programable, with varied patterns Retains time without power for up to 3 years Accurate to within +/- 1 minute per year Many more features and settings The POD clock measures 15cm wide, 6cm deep and 5cm tall
FIND OUT MORE 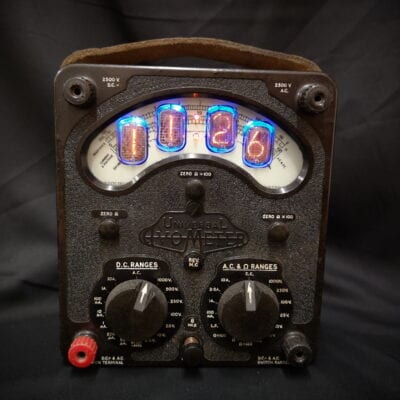 The Heritage Avo-8 Nixie Clock This is an original Bakelite 1950's Avo - 8 that has been carefully upcycled into a great little Nixie Clock. It's the much older Avo with the characteristic curved dial that is instantly recognisable. In order to fit the Nixie tubes in, a carefully curved circuit board was designed and then the original dial recreated with the holes in the right place for the tubes. Everything behind the glass is new, the bakelite casing and controls on the front are all original to the instrument. No two of these Heritage Avo clocks will be the same, the casings all bear marks and labels they aquired throughout their life with each one being used as an invaluable measuring device back in their day. We make the Heritage Avo clock in two versions, one with a blue backlight and one with a warm white backlight. However if you would like a different colour then please just ask and we can make one to order for you. Hours and Minutes display on four IN-12B nixie tubes with 16mm digit height - tube life in excess of 20 years Quartz accuracy for timekeeping, with adjustment if clock gains or looses over time Simple time setting using two buttons. 12 or 24 hour modes. Standard, fading, or crossfading with scrollback display modes. Programmable night mode - blanked or dimmed display to save tubes or prevent sleep disturbance. Made from an original 1950's piece of test equipment. The Meter measures about 17cm wide, 19cm tall and 10cm deep.
FIND OUT MORE 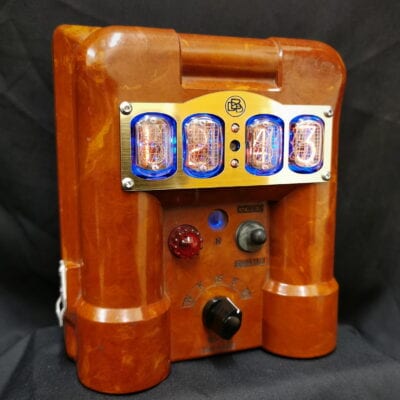 The RS-70 was a Polish made radiation detector designed to be worn around the neck, and would beep and light up if the wearer entered an area of high radiation. Once stood upright and upcycled, they make wonderful and interesting desk clocks! Made from Bakelite, each one has the original year of manufacture stamped into the front. The clock uses our latest generation electronics, and is feature packed and super easy to set with an hour button and a minute button respectively. Once you've set the time you can then just leave it to run with an accuracy of +/- 1 minute a year. Or, if you like playing with settings, then there is a whole booklet that comes with the clock so you can pretty well adjust and fiddle with everything. Time and Date display on 4 IN-12 Nixie tubes Tube life in excess of 20 years Full colour RGB programmable back lighting with various display modes Light sensor, so it automatically dims at night Battery backed time - upto 3 years Programmable Blanking Anti Cathode Poisoning Each clock individually signed and numbered
FIND OUT MORE 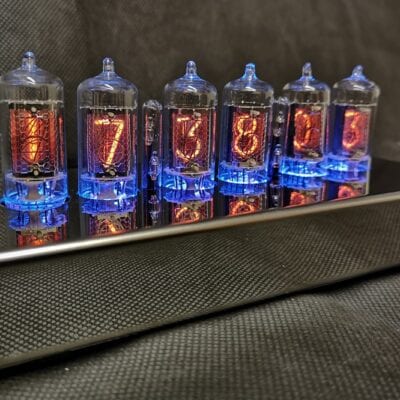 The T-1000 Nixie Clock, a contemporary design inside a mirror finish Stainless Steel case. A 6 tube version of the little 'Naboo' Clock Uses 6 of the Z570M German nixie tubes and has a host of features including. Time and Date display Pogrammable RGB lighting that changes colour on the hour 12 / 24hr mode Nixie tubes can last in excess of 20 years before needing replacement Programmable Colon lights Fade / Slots / Scrollback display effects Alarm Measures 185mm wide, 80mm deep and 70mm to the top of the tubes
FIND OUT MORE

See what else they have on offer over at